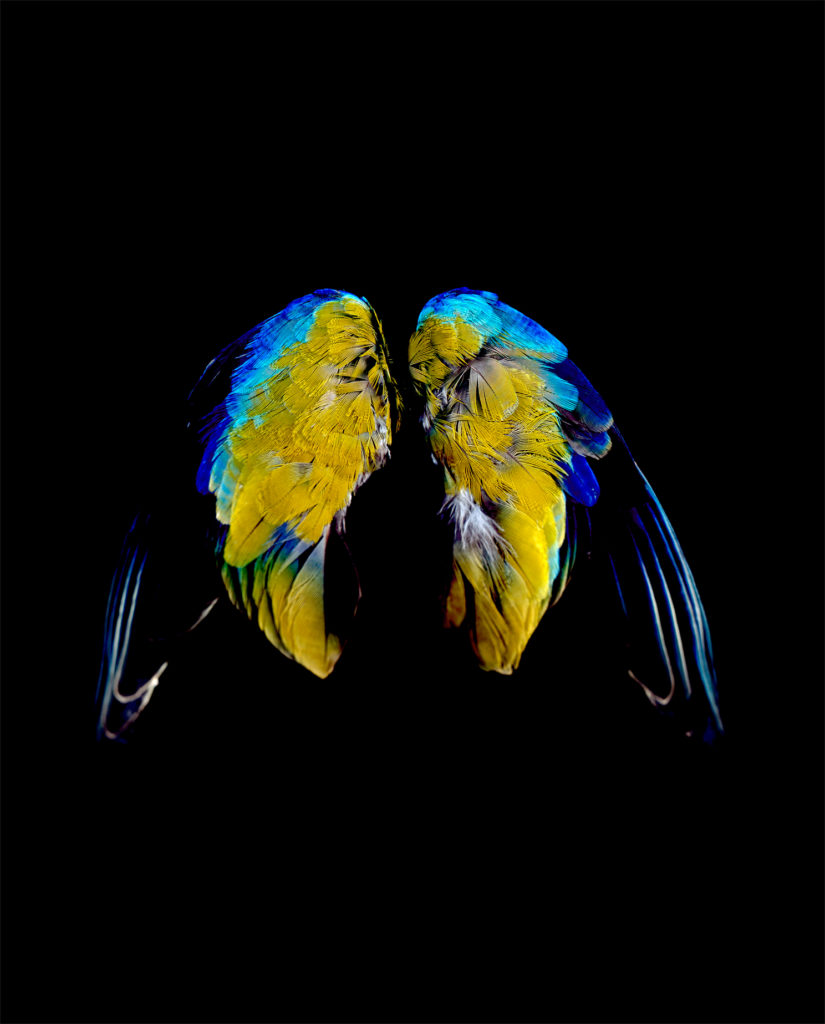 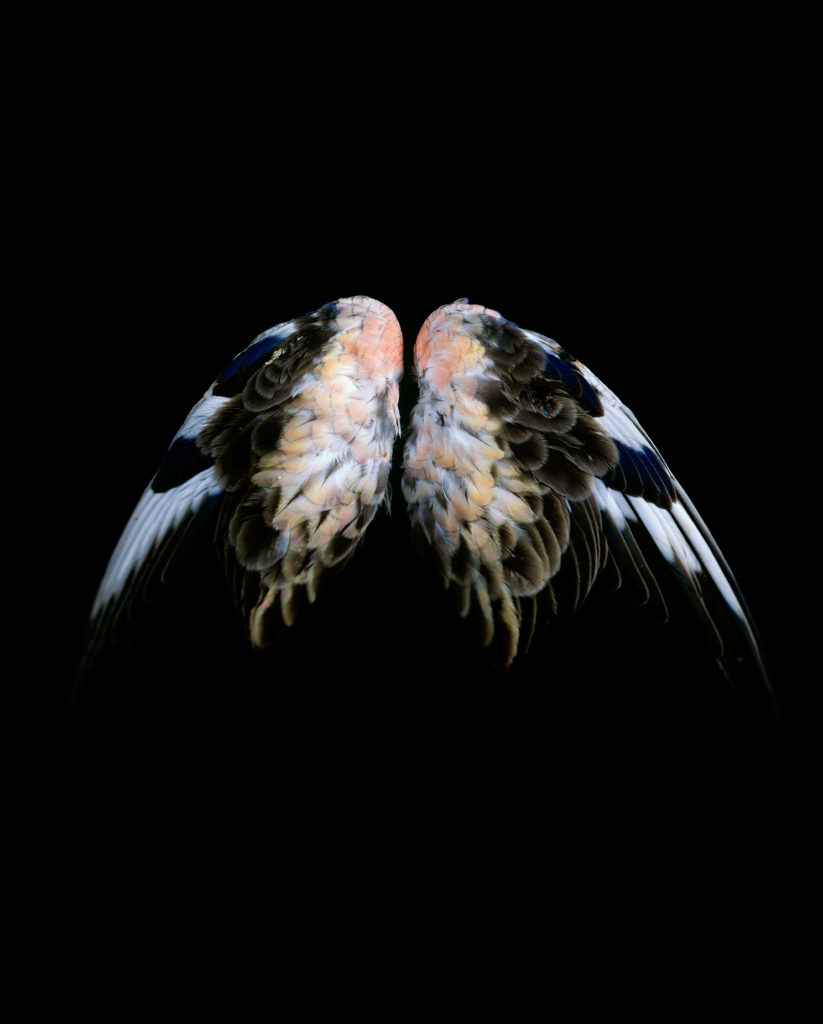 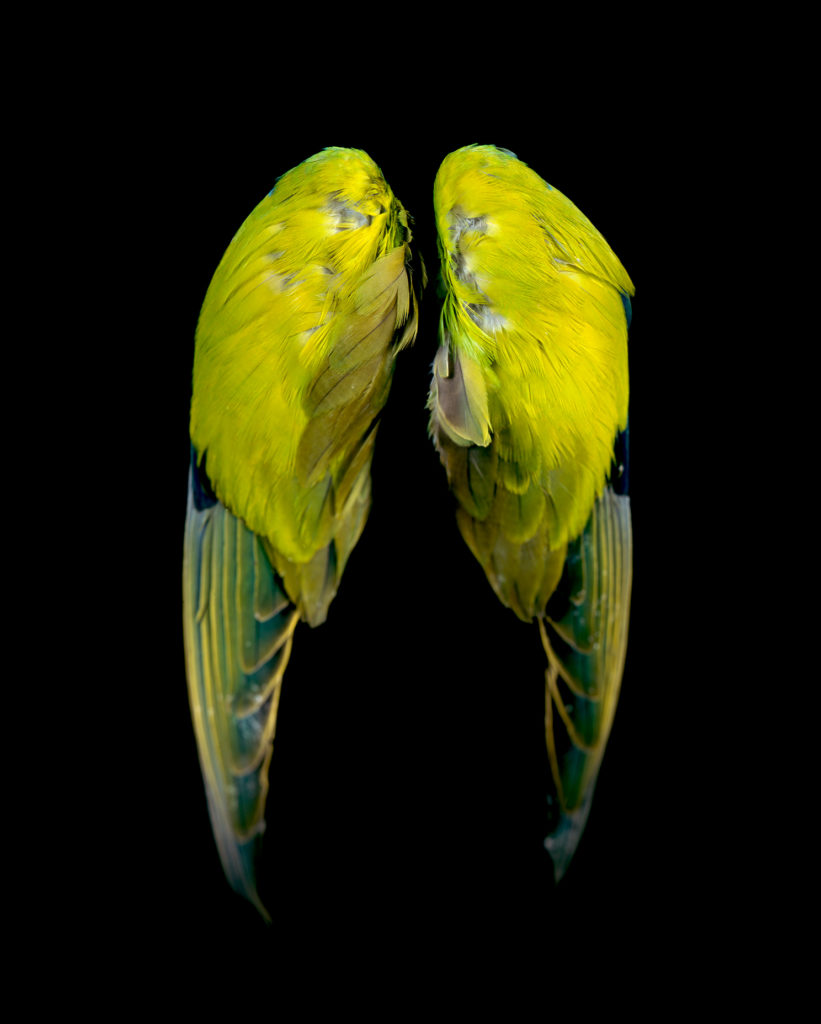 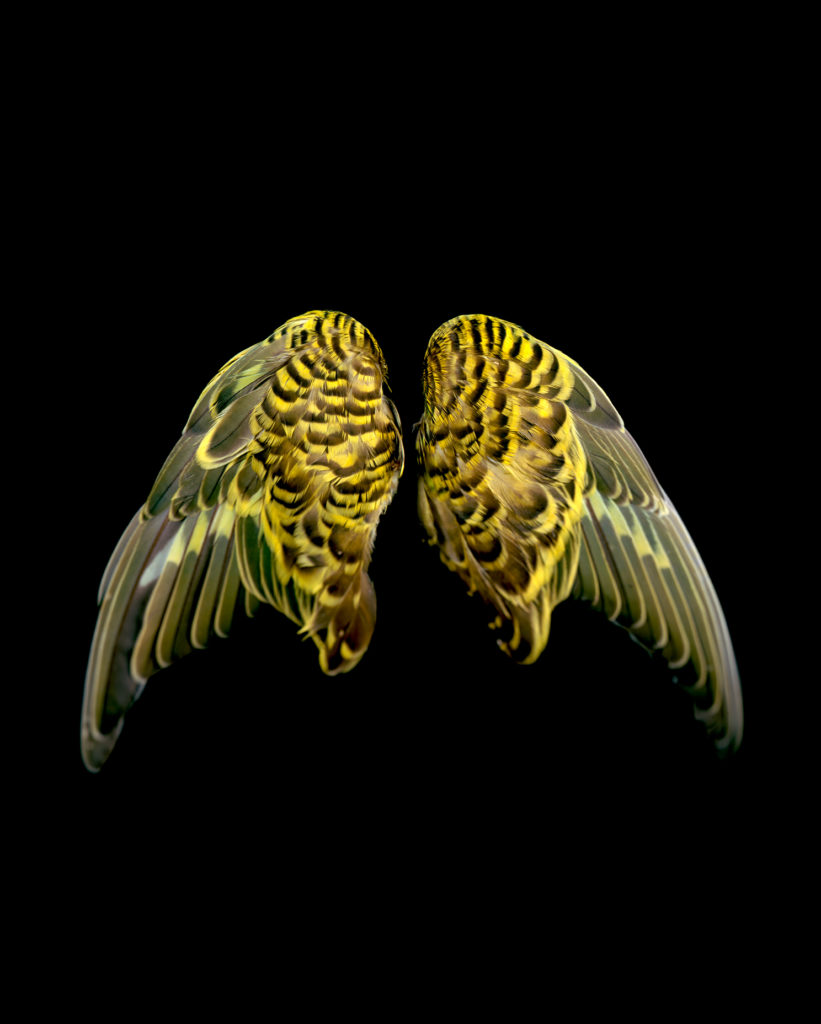 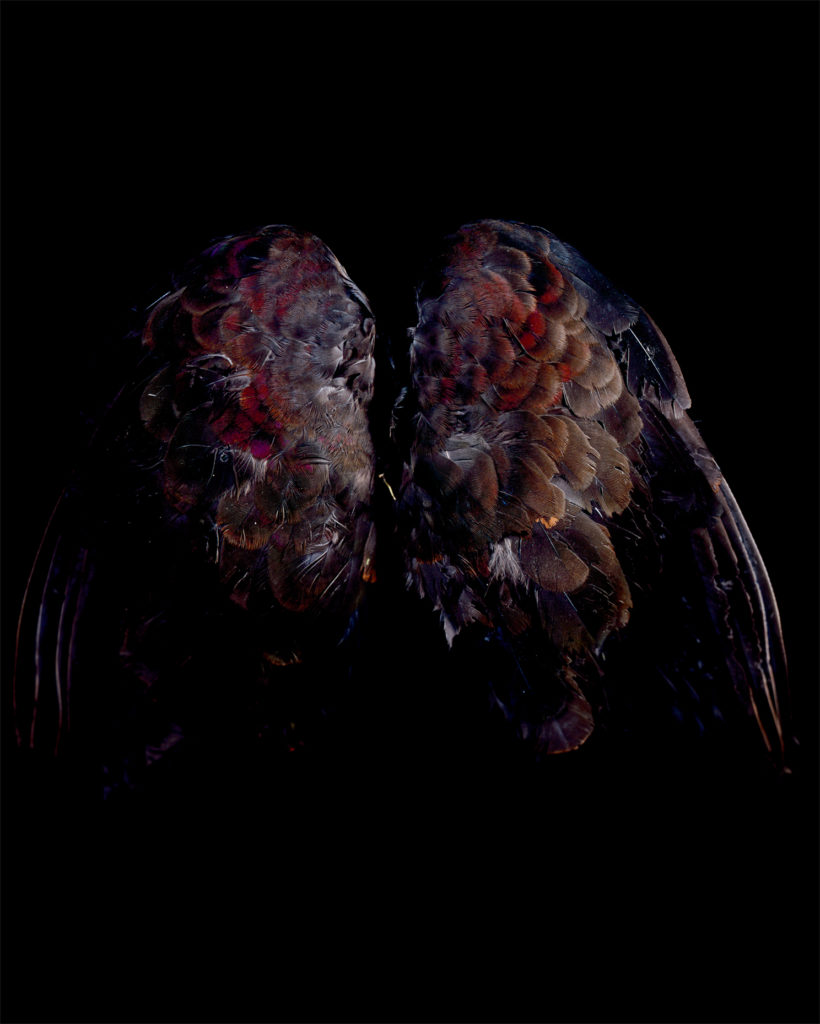 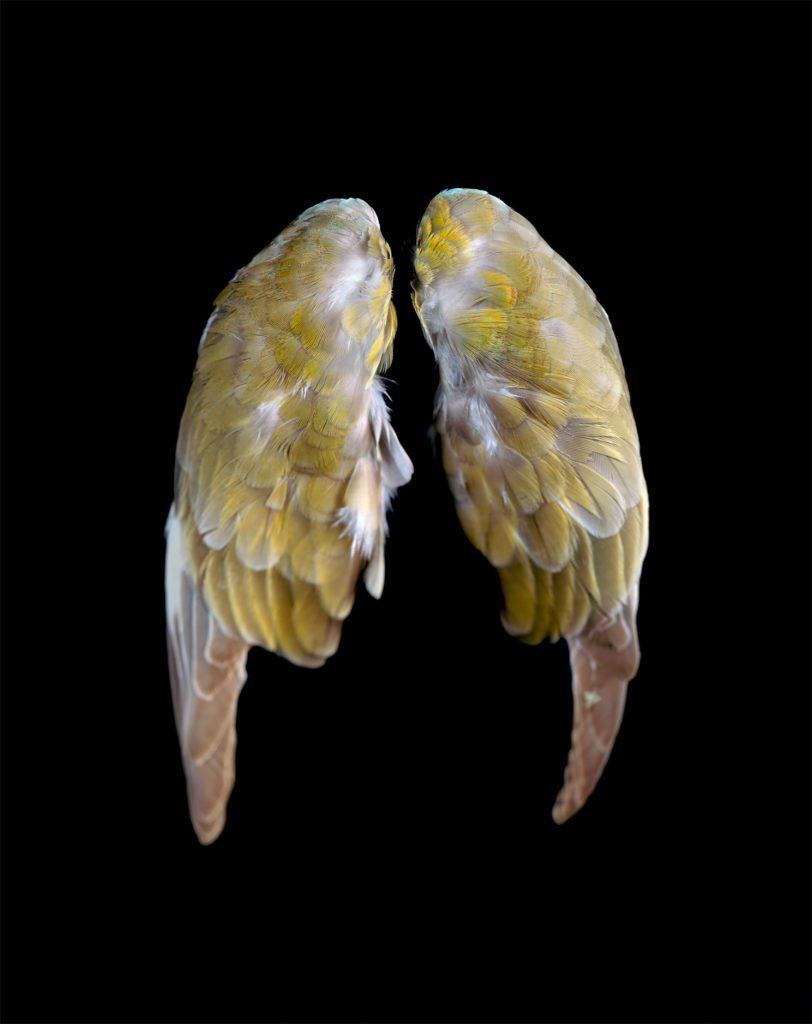 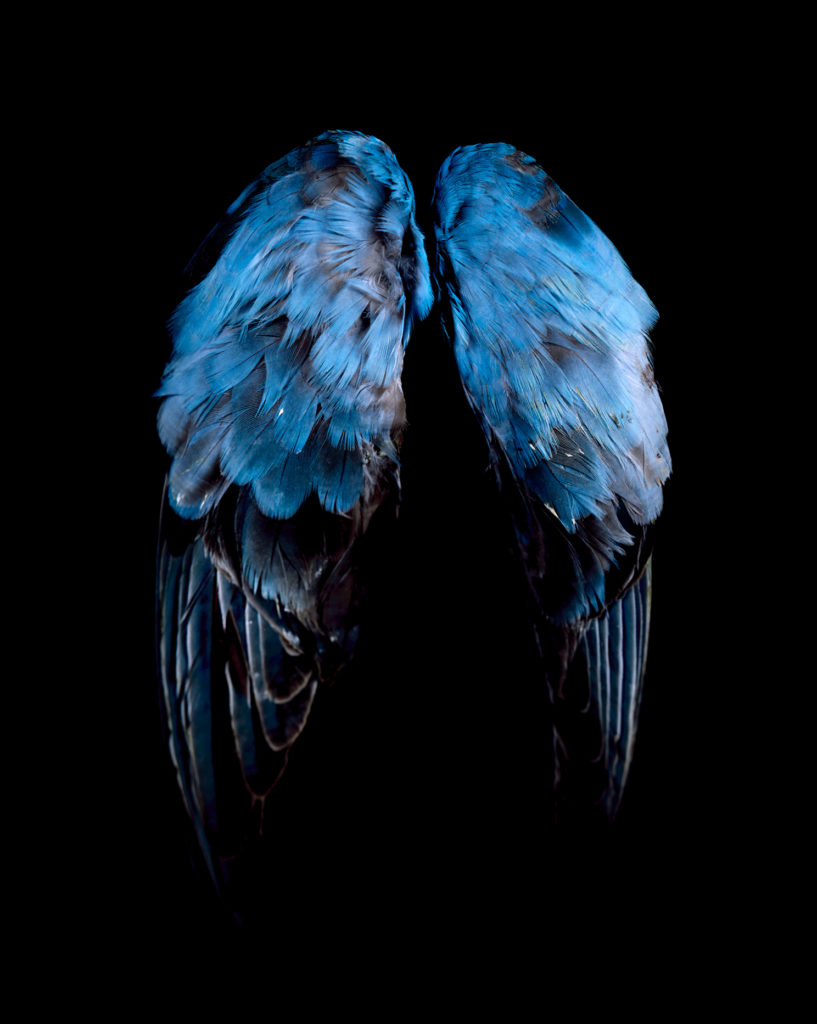 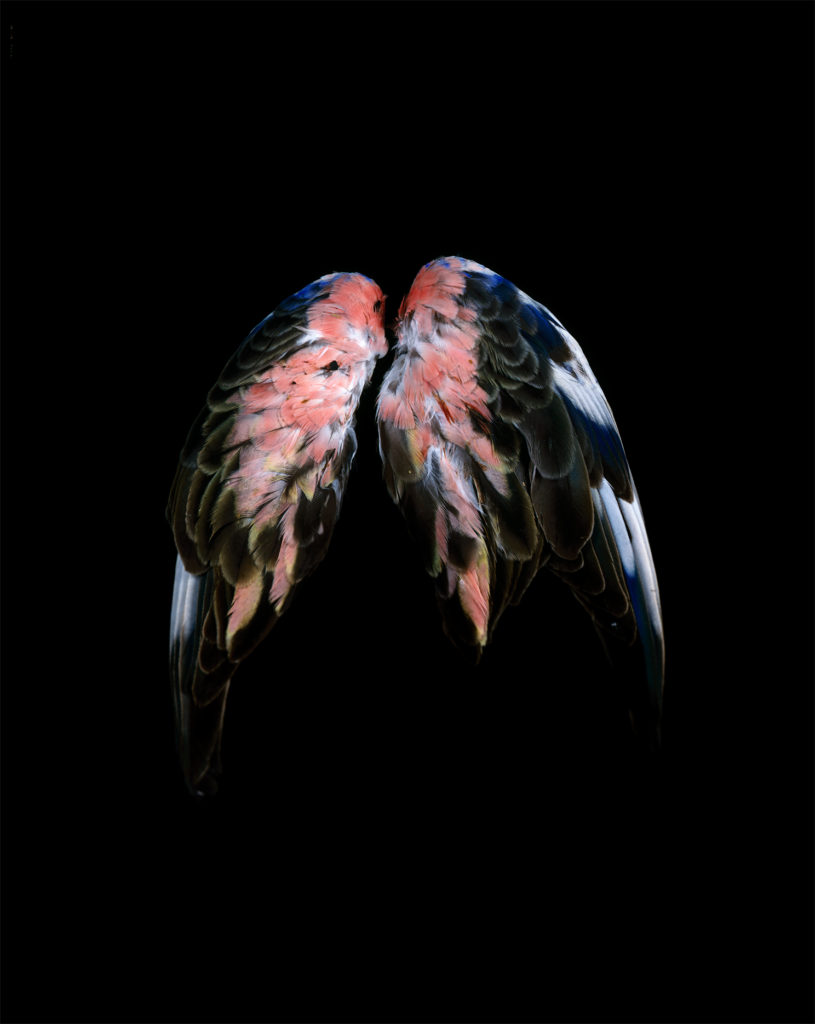 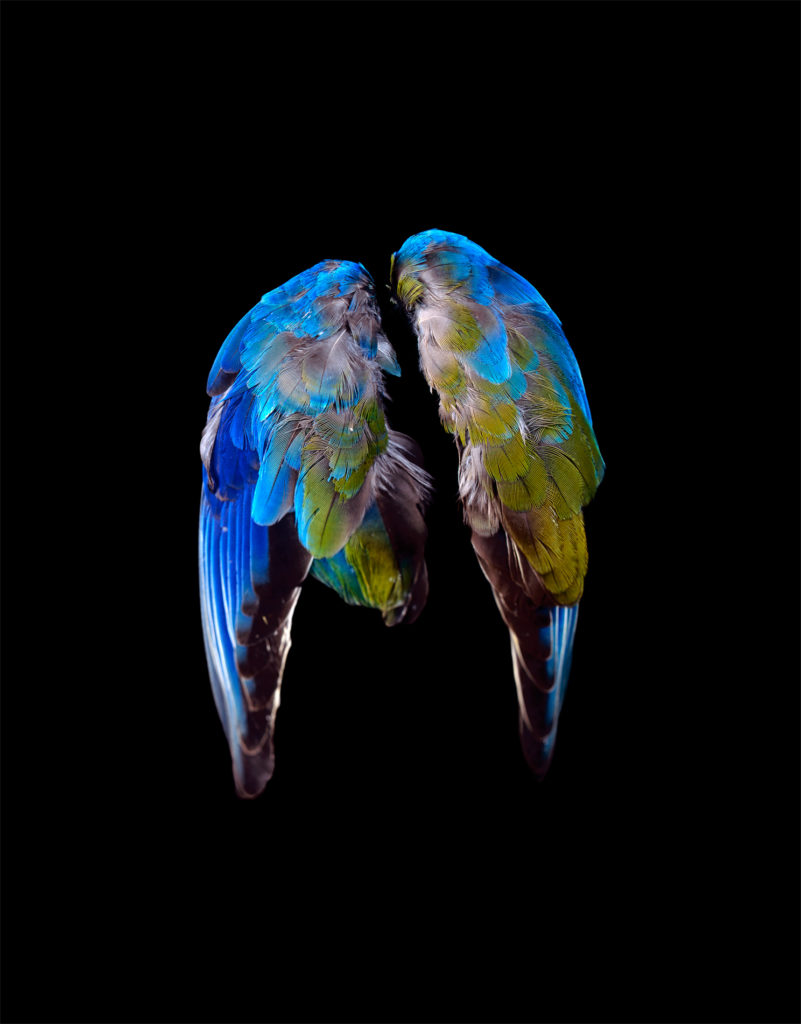 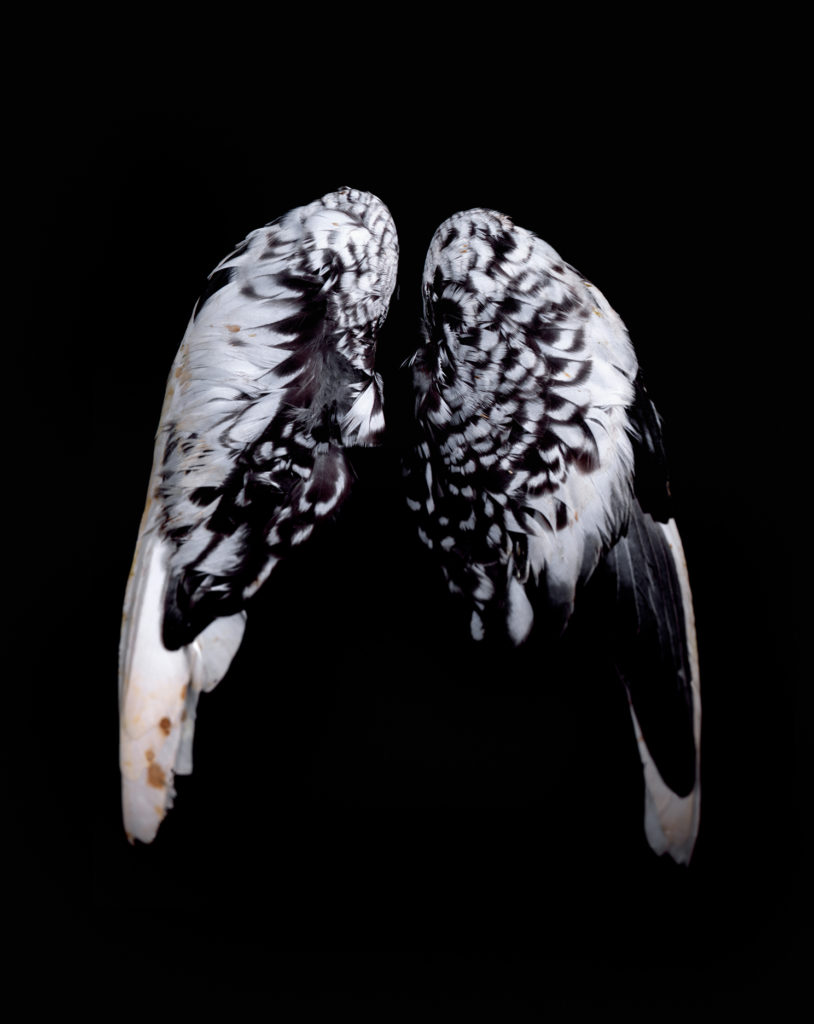 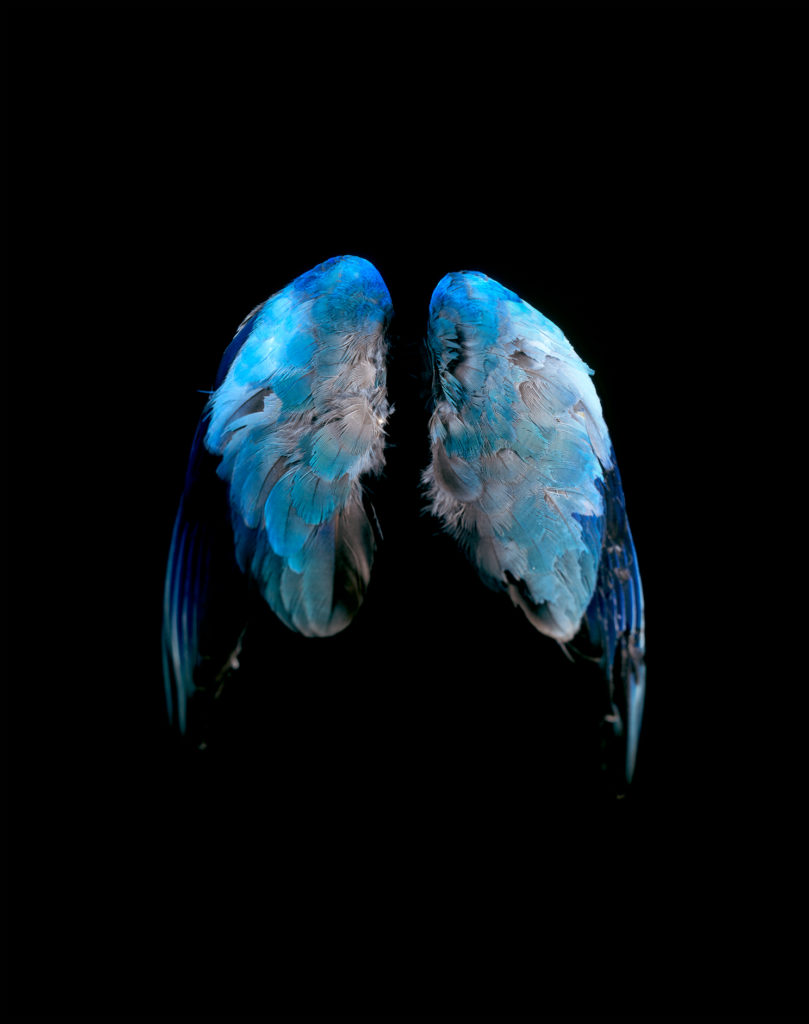 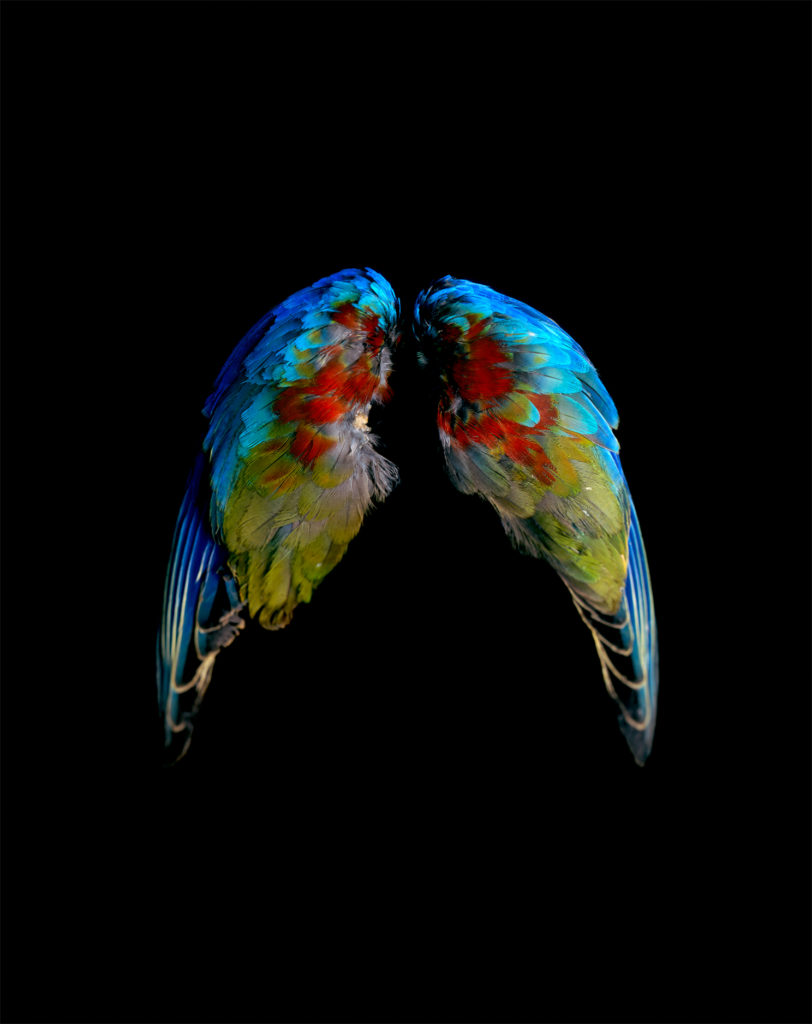 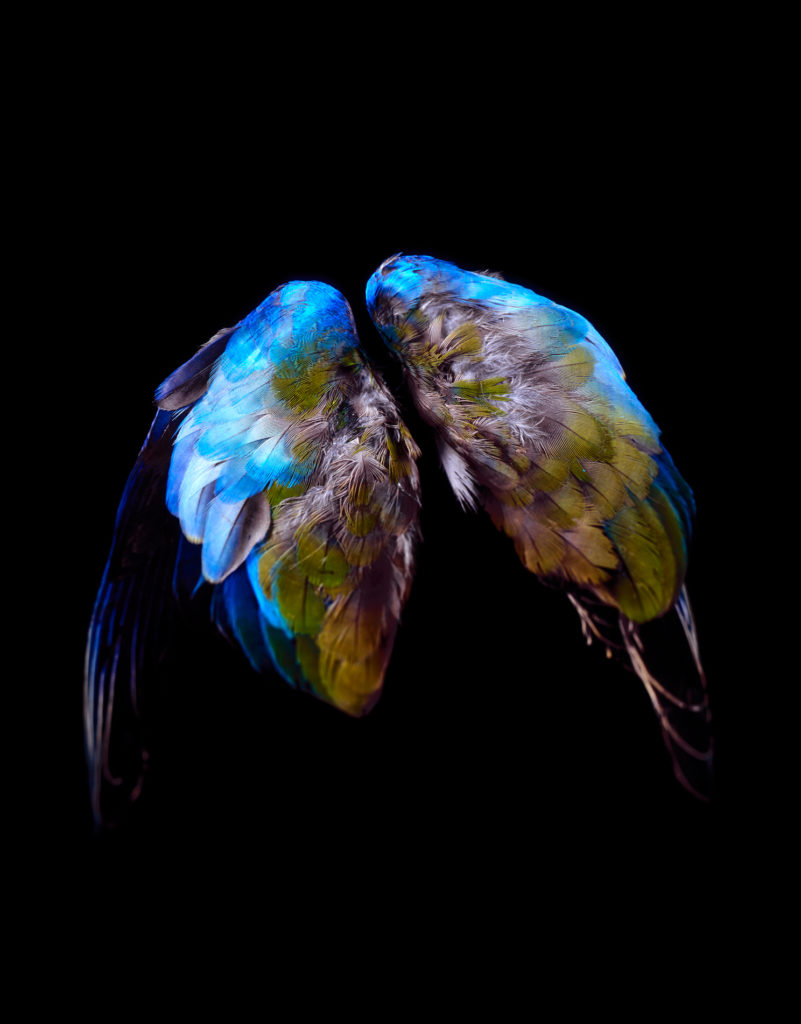 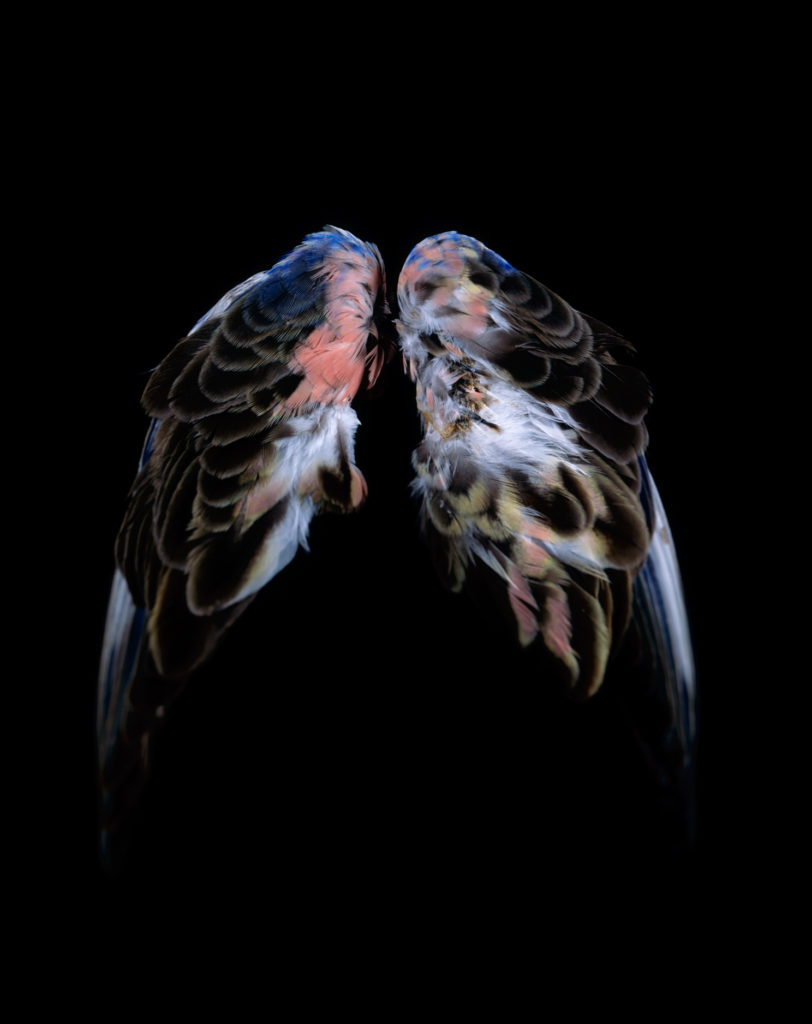 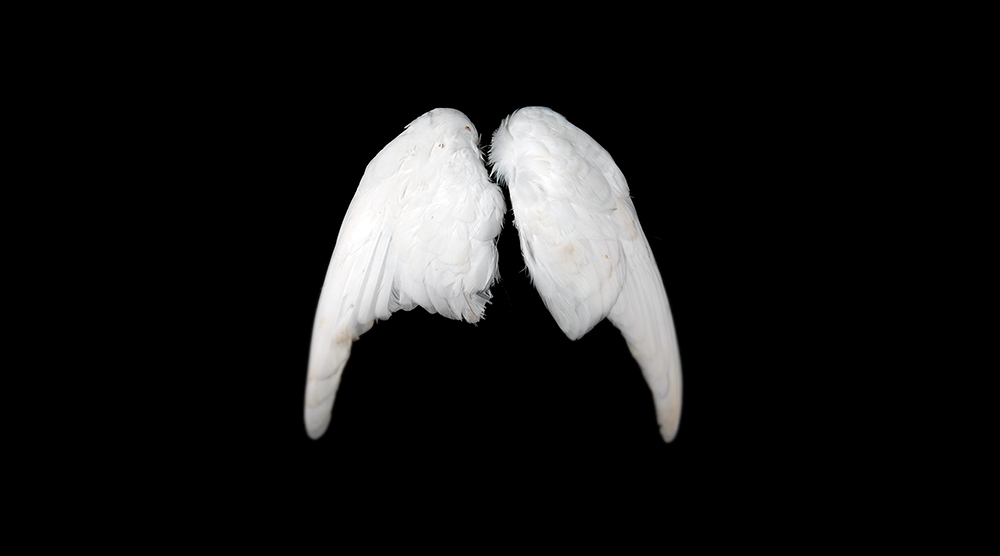 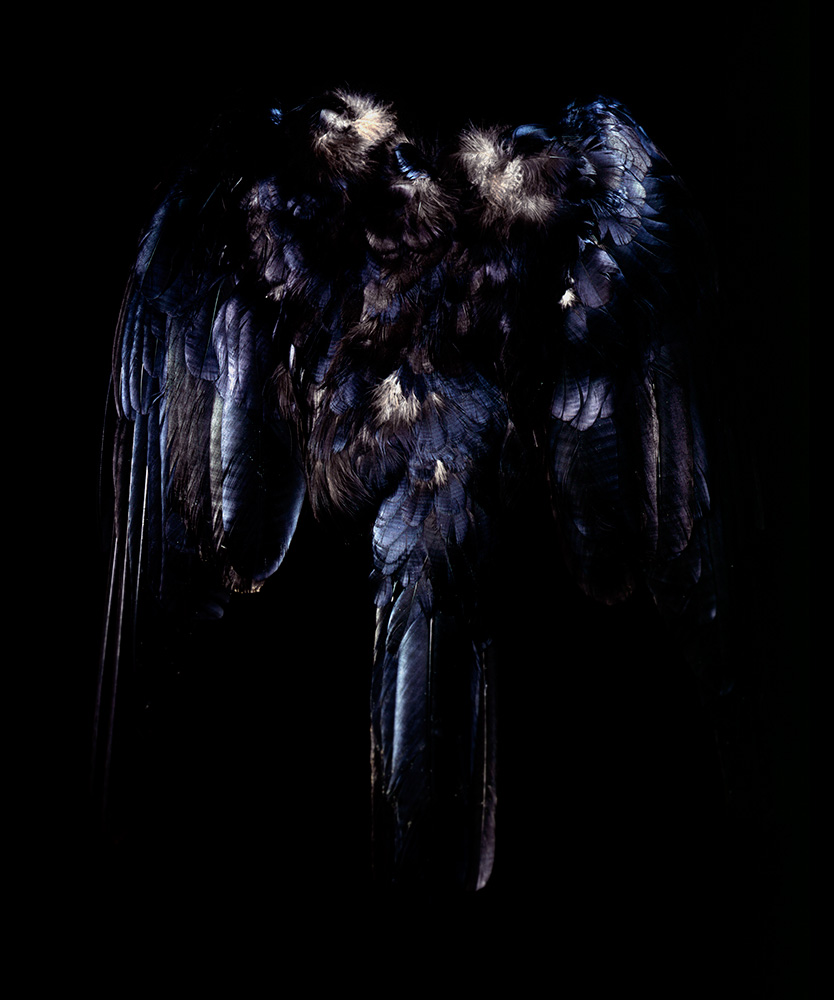 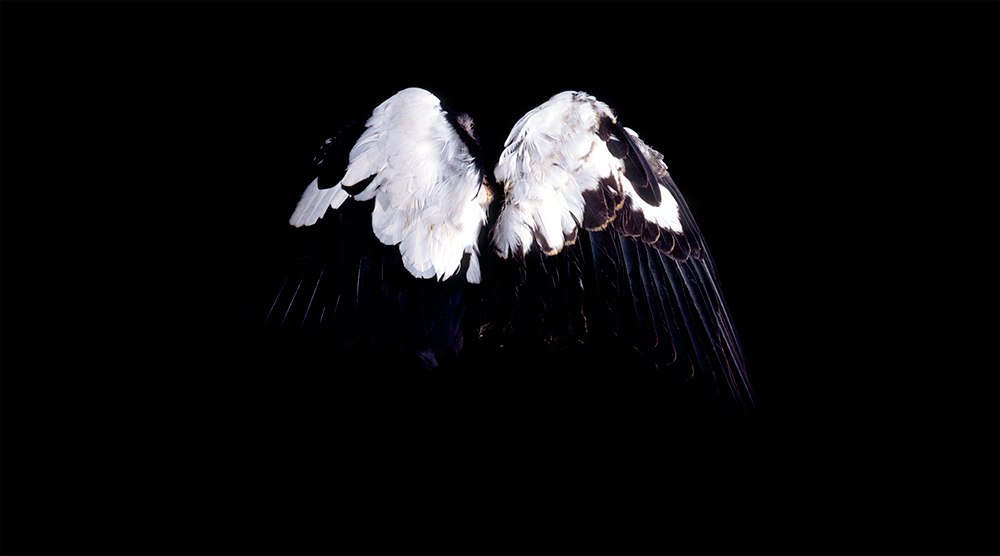 ” Whatever the bird is, is perfect in the bird” ~ Birds, Judith Wright

Evoking an easy perfection of existence, Wright’s line equates form with being, “Weapon kestrel hard as a blade’s curve”, bird as knife becomes an inescapable way of being. Wright’s birds become symbols, generic exemplars almost, lost to themselves. Yet the terror of her broken night bird, “He was all eyes, furious, meant to wound” is wholly particular, in extremis the bird regains its self, becoming again completely individual.

CJ Taylor’s large scale photographs of preserved bird wings initially hint at the specimen form suggesting the geometric taxonomies that classify the world through separation and division. Preserved, their colours shimmeringly bright, every detail is available for our prolonged scrutiny as is rarely possible in life, each pair of wings appears as an exemplar of a type; the jewel bright parrot, the subtle and sad budgie wings.

But poised against depthless black and vastly over scale, on observation this impression falls away. Small details are given up, of bone ends and damage, imperfections that undermine this ideal of singular perfection, these are not symmetrical immaculate pairings. Losing their museological status in this realisation they are individuated, revivified, each one belonging wholly and only to one being.

The eye seeks wholeness, harmony and order in beauty. Damaged, broken off from the unity of the bird, absolutely unique the wings seem to resist this exemplary kind of beauty yet they are undeniably, luminously beautiful. There is order, harmony and wholeness of another kind under the gloss of the feathers.

Every wing echoes the form of the bird, the arc of the parrots wings appears as a pair of birds, not quite mirror images but a doubling and echoing as if the wing shape holds within in the idea of the entire bird.

Subtly these images reassert this unbreakable unity. Hived off from the body of each bird and held in tension in air, the space between the wings is charged, becoming embodied, almost corporeal. Not absence but filled with flesh and flight.

Intended as specimen parts, these wings become here portraits of the whole, the missing restored. 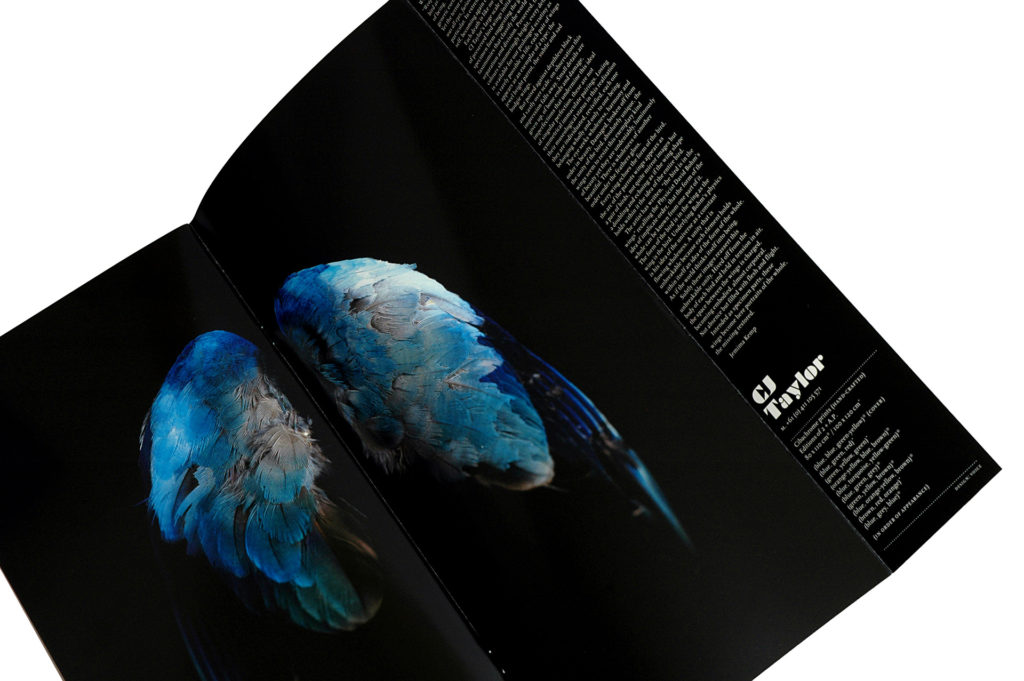 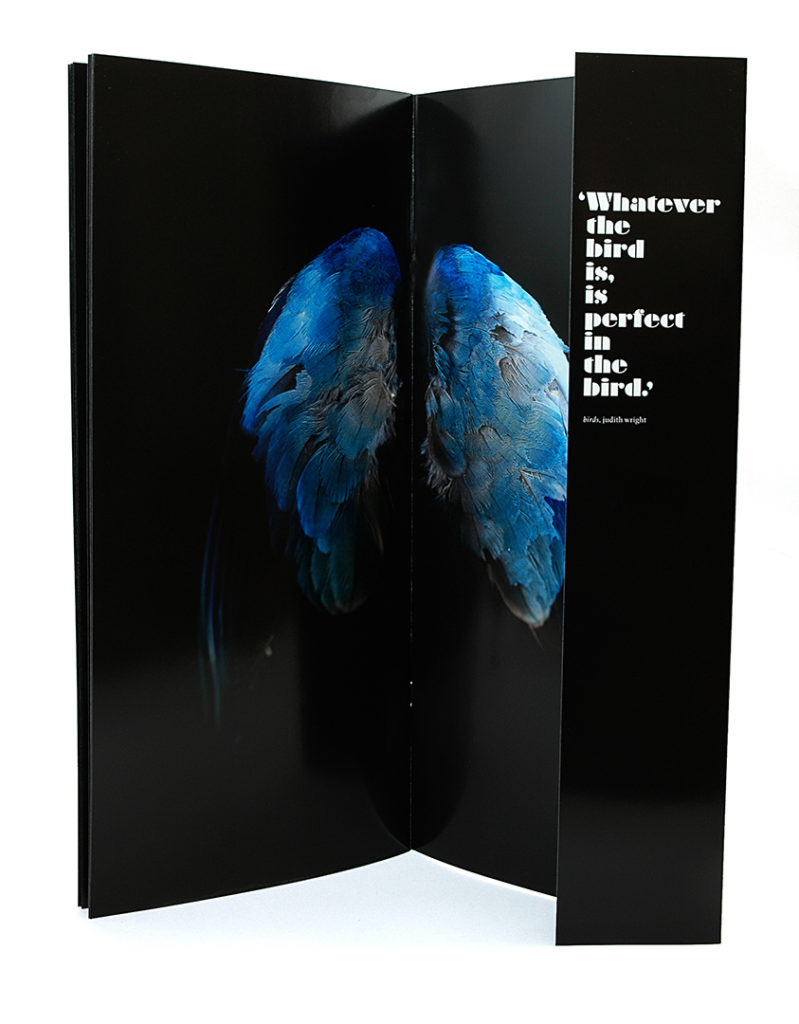 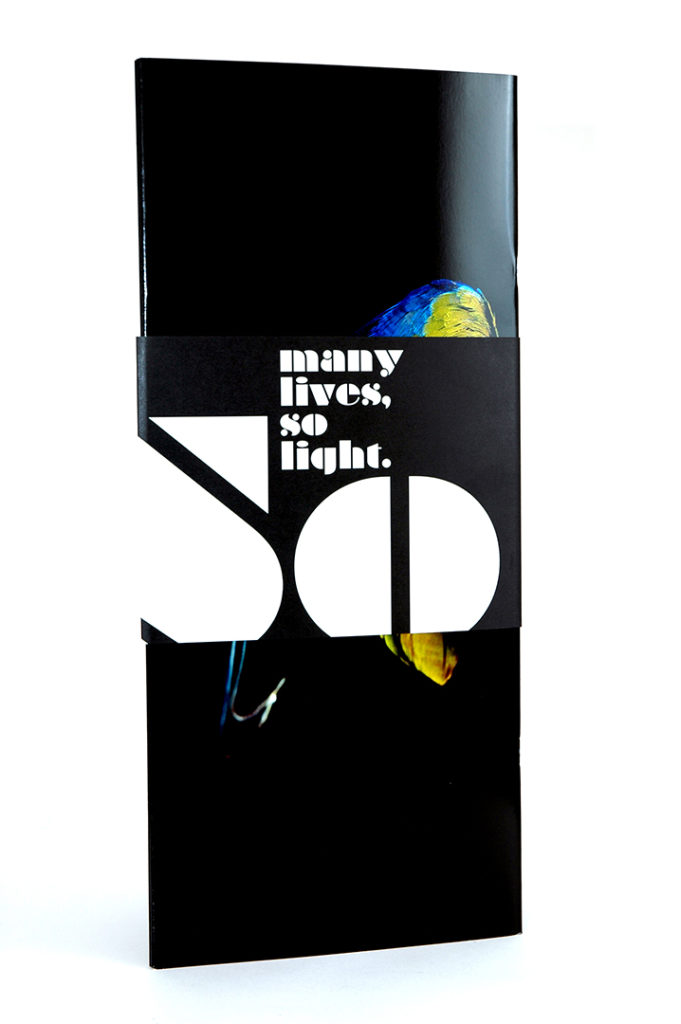 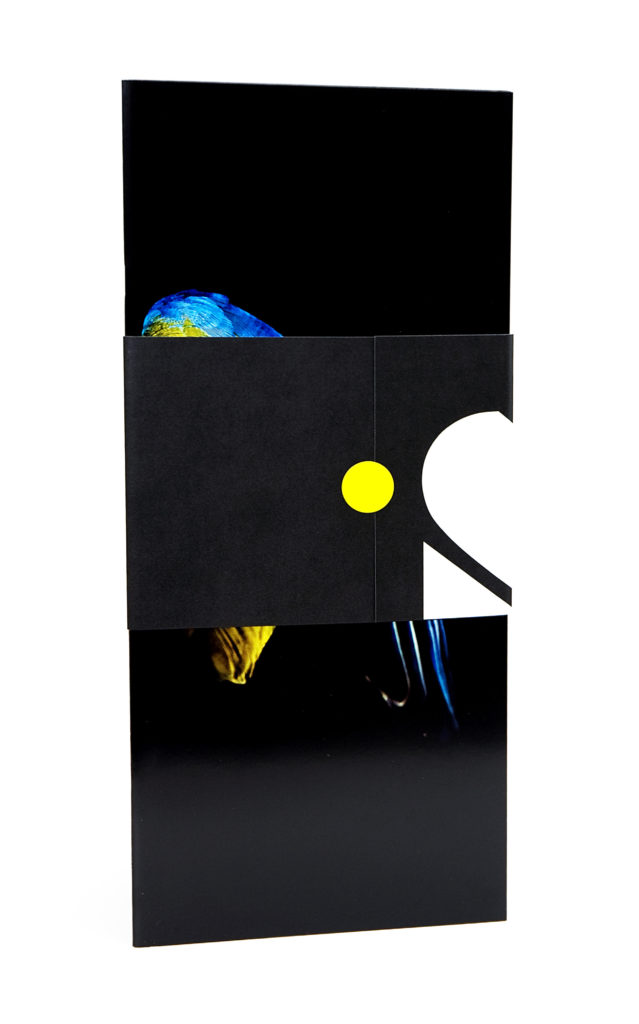 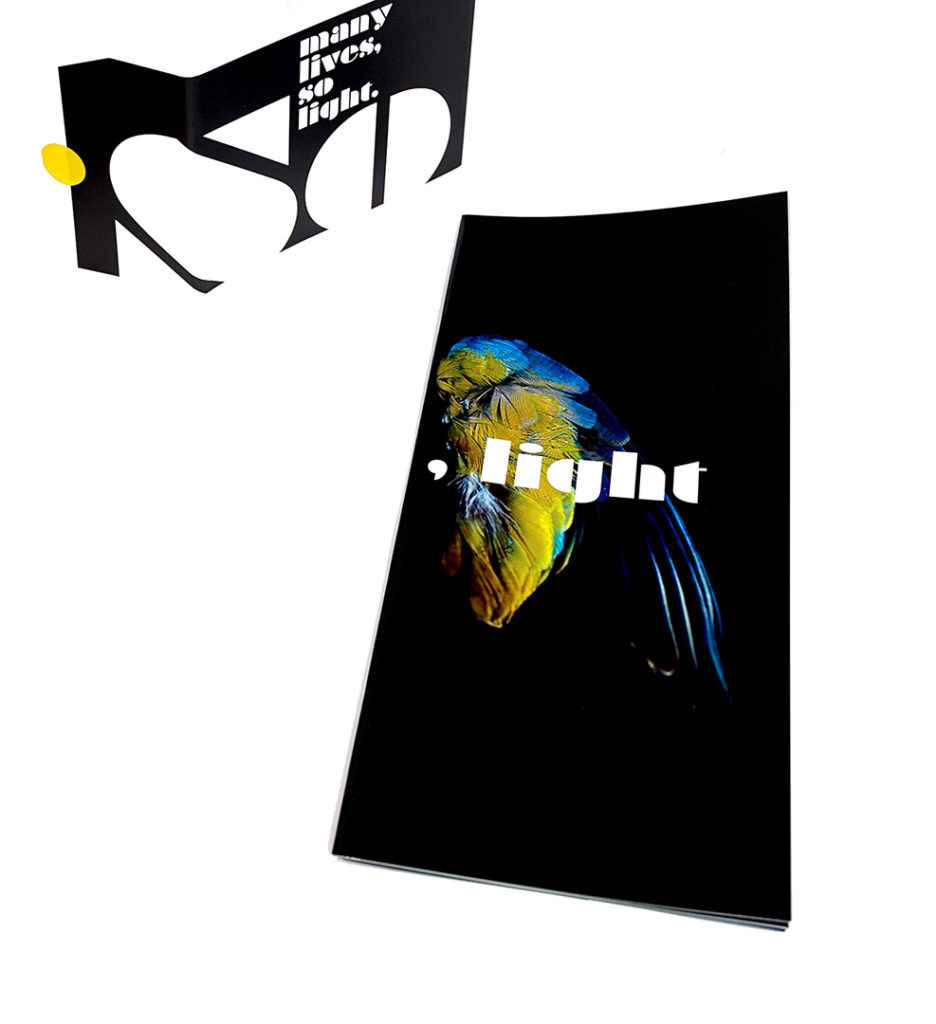 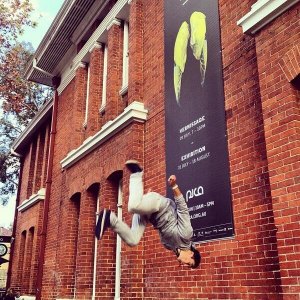 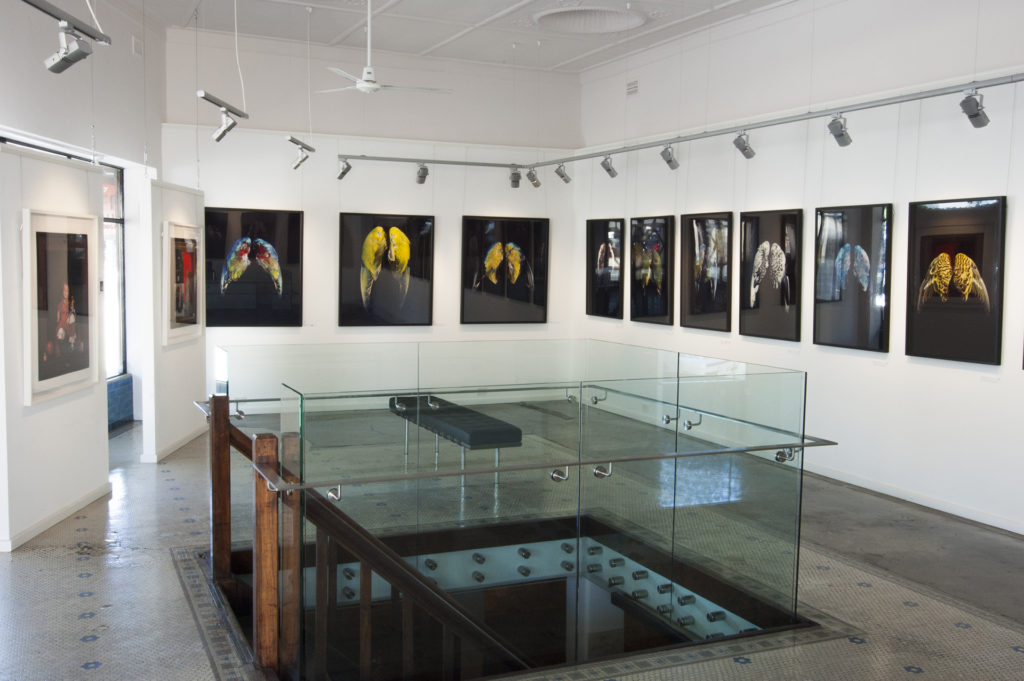